Wuzun't gonna mention the unmentionable thang, but
now the horror is in the interminable news loop, an' thousands
of others suffered too.

I wuz groped two weeks ago.

Because I wuz wearing a skirt (they said).

Git in the grope line. 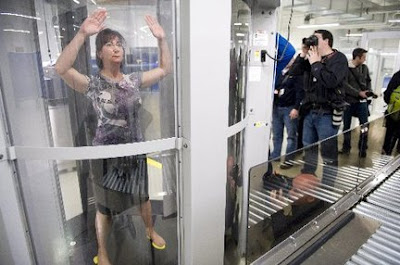 Ain't gonna shiver ya' none by givin' details of ' the indignity, the places an' depth of the violation.

I drew a shocked breath, "This ain't seemly, Honey," I said. 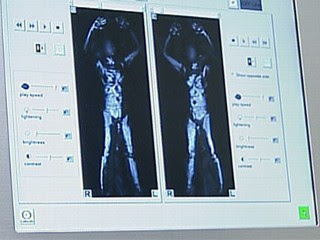 Iffin' I'd 4 workin' brain cells and an ounce of energy left that late afternoon, I'd have swirled mah skirts around, marched downstairs, rented a buggy an driven the 11 hours home. Barrin' an emergency, it may be a long long time afore I git on a flying cattle car, cause I doubt Uncle Santa will put a NetJet card in mah stockin'.

Mark Steyn commented on this new putrefaction of civic life. He suggested we's busy profiling
things instead of people. Can things turn jets into terror weapons? The "shoe bomber" and the "underwear bomber" as if pair of BVDs could blast a building to bits.

"What happens when a woman goes aboard a plane with her implants filled with jello explosives? The boob bomb. Then will TSA insist on squeezing every set of mammary glands that boards a plane? What if we get an ori-fice bomber?"

What will it take for Americans to resist this descent into utter madness.

What will it take?
Posted by Aunty Belle at 8:17 PM

Muslib terrorists from Detroit to Yemen are laughing at us for this stupid Obamanation tactic.

Guess I'll opt for the scan, but since humans don't understand (and are jealous of) Troll anatomy, I'll probably wind up getting the full treatment anyway.

I'm used to dinner and drinks beforehand, so this simply will not do. I may have to change what I do for a living . . .

Troll, thas true! as a troll, at least ya won't need no prosthesis to keep up yore image.

GWB, as gov of Texas, had some angry state Demo say "I am gonna --ahem-- you, governor," to which W replied, "ya better kiss me first."

This is an example of where racial profiling would work quite well. All who fit the profile line A. Everyone else line B. But that won't happen with this gov't.

You're right as far as the implant or orifice bomb, once they figure out the detonator that will be the one that works. Then we'll be on to full body X-rays.

Part of Binladen's stated mission was to incapacitate and bankrupt the west, stupid procedures like this prove that he's achieving his objective.

I'm flying the first week of December, perhaps I will wear a tinfoil bowtie for the scanner.

and I think I like Amtrak a lot more than I used to.

I'd go for the scan. I don't want to spend any more time in those lines than I already have to.

Aunty,
My deepest sympathies to you.
Ain't no way ya should have been subjected to this invasion of your privacies.
To Mermaid's merriment, I get pulled aside and " manually inspected" every time I travel because the body profilers never believe everything on me is natural grown material. I do not share her merriment.

Is ya gonna stop wearing skirts when you travel?

I don't fly but about once a decade or wear skirts, so this isn't such a bugaboo to me.
If I WERE to take flight, the scanner would be my choice. It seems like a no brainer to have a bored TSA agent glimpse a few seconds of xrayesque me over being physically handled.

Ethnic/racial profiling will not provide security on planes. Life is not that simple and terrorist organizations are not that stupid.
They are actively recruiting "non muslim looking" operatives, for that very reason.

Remember "Jihad Jane" ... blonde, blue-eyed Texan? Or the young Alabama kid who is now a leader of al Shabab in Somalia?
All he needs is a haircut, shave, and a suit to walk right thru a racial profile checkpoint.

The good news is the European scanner screens show your body as a stick figure, not a near photo quality nudie pic.
They have more false positives, but that may be a small price to pay for security and some semblance of privacy.
We may have these machines here in a year or so.

I am sorry that you had to suffer a pat down Aunty.

Moi cracked me up.

Karl.
howdy do this mornin' Yep, "Binladen's stated mission was to incapacitate and bankrupt the west, stupid procedures like this prove that he's achieving his objective."

ain't it so? Could we have any sillier keystone cops set up? And to no true purpose.

Boxer-babe! NO! NOOOOOO! they ain't gonna win iffin' we resist this thang. Doan fly. Shut down the airlines an' let's see what the airline unions say about that.
B-Babe, I'se lookin' fer some enterprising young whippersnapper to set up fleets of net jets at 1/3 cost, all run from private or little muni airports.

The man wif' the handsome dawg...well, I hear ya. We share the same philosophy. Doan want no folks unfairly profiled--but thas' exactly what's happened to most Americans of all ethnicities--we is de facto profiled in order to prevent one small group from feelin' profiled.

Imagine witnesses saw an Norwegian lady rob a bank, but the police were not allowed to question all the nearby tall blond wimmen fer fear of "profilin" .

Would invite ya to come to OIA an watch the cattle herdin' an invasive pat downs, the chaos and expense of this charade.

I ain't an advocate fer racial or ethnic profilin', rather I is a HUGE advocate of *terrorist* profilin'. AN of course, not all terrorists is of Middle Eastern descent. (fer the record, Aunty has a few Lebanese genes via mah French Lebanese GranMere..an two uncles who are routinely taken fer terrorist types on account of their distinctive Lebanese features)

I reckon the model I like is simple- look at the *people* not the shoes or underwear. (An' yes, look hard at those of of M E backgrounds for the obvious reason.) That fella who wuz caught by a border agent when he came down from Canada on his way to bomb LA (or wherever) was sweating bullets in 22 degree weather. The lady agent knew that PERSON was up to something--she found a trunk full of naughty thangs. As fer Jihad Jane, she belonged on a no fly list long afore she was caught-

FC, I'se jes' wonderin' if surveillance of 300 million of us by invading our bodies and trampling our freedoms and burnin' $$ on silly procedures makes the terrorists de facto winners? Our culture, based on personal freedom is being destroyed, ain't it?

Glad you brought up the CHertoff connection. while we endure endless loops of repetitive gushes on william and kate, not a word on this newest corruption.

i have to fly first week of december. Im thinking of making a t-shirt that reads:


when does one "get out" aunty? before or after you have to wear a star?

Rotty
I'm going with the first shirt and before the star.

Aunty,
Good points. I guess, since I can choose to fly or not, I don't see the pat down or the scanner as a threat to my freedom.

I freely choose not to fly ... often.

Lost in all this criticism of TSA is the simple fact that Uncle Sam's strategies seem to be working.
Terrorists are not blowing up planes. Of course they will at some point, the odds are with them.
Still, we seem to be foiling their plans, even when they switch gears as in the recent freight bomb attempts.

I'm with you on your profiling suggestions.

In 1984, I was sitting in my Terrorism class at the Federal Law Enforcement Center in Glynco, GA. The FBI instructor, who had spent years undercover with a particularly nasty Motorcycle gang, and who now had a price on his head, told us that the kind of bombings and terrorist acts we were seeing in Europe and the midEast would come here.

Well Aunty,
I heered on the mornin news your troubles is because you wore the wrong travel clothes. Looks like there ain't gonna be any searches of wimmen wearing them burkas! Iffen you is screeching why!!!!??? This could cause an incident because it's not in line wif theys beliefs.

Course the TSA did take a 3 year old away from it's mama to strip search. The mama wasn't allowed to
go wif her terrified chile. Reckon this gives new meaning to a loaded diaper.

Iffen you was to ask me, its the new meaning of insanity.

thas' religious discrimination. Does ya think a Catholic sister will get the same deference?


If Americans doan stand up en masse and refuse to submit to a stoopid rule that the terrorists own wives doan have to submit to--then we ain't worth savin'.

It's jes that simple.

Now, there's an idea for Chickory. A habit.

Aunty,
you ask me it's way more than religious discrimination.
It is favoritism of the terrorists ideologies. Ain't a scrap of logic to this so the actual reason lies elsewhere.

eh, i thought i left a comment a few days ago. but i probably just left because i'm incensed over this situation. i don't know if i want to let my minor child to fly on scout trips anymore ....

I can Chick9 mine

Fishy,
lemme tell ya'--onc't a burka went ahead of me at Dulles, not required to remove nuthin'. Next up Aunty wif a light linen shirt wif' a camisole peekin' through at the neck...

TSA said "take of the jacket"

"Take it off, please"

"Take it off or step out of line"

"Ain't takin' it off--ya jes' ;et that Muslim lady go throrugh wif'out removing one yard of the 30 she's wrapped in, but ya want my shirt? I'd say thas' discrimination."

TSA calls supervisor, the line behind me is drop jawed.

Supervisor looks as me. I say "roll yore tapes back, you'kk see he passed a Muslim woman in a burka jes' afore me, but she did not take a thread off. Would ya agree thas' religious discrimination? My religion calls fer modesty, an' takin' off this shirt exposes more'n I ain' to display."

She looked hard at me--I looked back.

She waved me on.

The crowd behind said "Hell yeah!_"

Heck NO---doan let the little fella travel thataway. SOrry to suggest this, but really, if predators find their way into coachin', priestin', teachin', reckon the TSA will soon have its share of them that applied fer the job for the sick thrills of it. Disgusting situation all around, ain't it?

I pay good money to get groped down at Gravel Gerty's massage parlor.