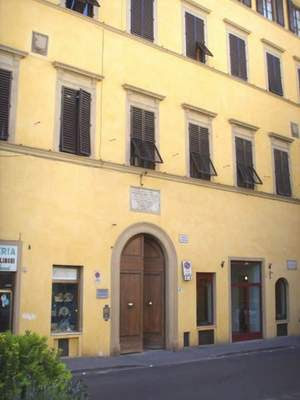 The grey sea and the long black land;
And the yellow half-moon large and low;
And the startled little waves that leap
In fiery ringlets from their sleep,
As I gain the cove with pushing prow,
And quench its speed i' the slushy sand.

Then a mile of warm sea-scented beach;
Three fields to cross till a farm appears;
A tap at the pane, the quick sharp scratch
And blue spurt of a lighted match,
And a voice less loud, thro' its joys and fears,
Than the two hearts beating each to each!

See, her Daddy din't want her to marry. Nope, already successful, Miss Elizabeth Barrett was a virtual prisoner in her London home.

But young Browning, six years her junior, fell madly in love wif' her rhymes an' schemed to meet her. Their romance blossomed, the pair conspired, a flurry of 574 letters in less than two years...'til at last she fled to the sea, there welcomed by her waitin' lover. Off they dashed to Italy--ah! Of Course! To Italy--the land dreamed of by yearnin' artists an' lovers. First to Pisa, then to Florence where they lived in this lovely villa, now a pensione for travelin' literati. There the had their son Robert "Pen" Browning, an' each played the muse to the other.

This romance an' artistic camaraderie endured a lifetime. Yes, Happy Ever After.

( How different from the ill-fated love of the Highwayman and Bess the Landlord's Black-Eyed Daughter. ) 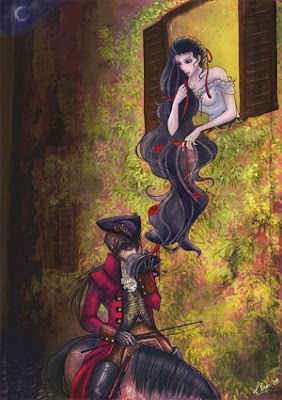 I never gave a lock of hair away
To a man, Dearest, except this to thee,
Which now upon my fingers thoughtfully
I ring out to the full brown length and say
“Take it.” My day of youth went yesterday;
My hair no longer bounds to my foot’s glee,
Nor plant I it from rose- or myrtle tree

Somethin' ya' might not know: Aunty and Uncle eloped too...long long years ago.

hope ya kissed yore sweethearts--though fer mah money some of the sweetest hearts is yore own kin folks.

Did you elope on Valentine's Day dear Auntie? A beautiful post. I should know more about these two ... so I think I will go do some reading. God bless granny.

You eloped on V Day? How incredibly romantic. I hope despite whatever trouble Granny is having you had a good day.

My parent's eloped too ... off to Folkston way back when.

I told my girls to elope and I would just write a check to them, rather then to the wedding contractors.

So far no takers.
So far so good.


Hugs and prayers to granny. x.

no no....we eloped in January--not Valentine's Day. But because it is a day fer sweethearts, I thought I'd tell our secret.

Granny an' me..here in the hospital, machines hummin' the lullaby.

Happy Valentine's Day to you, Aunty. I'm sorry to hear Granny is ailling. :-(

Take good care of her and yourself.

Well, perhaps I should have 'dressed' more for the part for replying?

(Well, not so much if your time is in the hospital)

(then again...watermelon is a natural chicken noodle soup)

Congratulation to both of you. How many years?

La Diva eloped the first time I was wed. In La Vegas. The only bummer was that the only Elvis Impersonator at the time was out of town so could not perform our ceremony. Should have seen it as a warning!