Who Can I Sue? 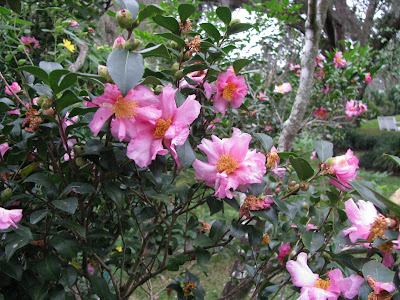 In mah bathrobe I went out to admire the sasanqua.

I'se still low sick, but I needed to see somethin' growin', so I jes' went out into the back forty, bathrobe an' all. (so shoot me, fashion police)


Uncle is in the woods....seein' as I wuzn't daid after two days, he figgered I must be on the mend.

So in mah bathrobe I'se pickin' a few blooms when a chirpy "HI!" sneaks up aside me.

"Well, ya do look puny. Guess that explains the bathrobe, huh?"

"What it doan explain is what ya's here fer, an' why ya sneaked in mah back gate wif' no invitation. I ain't expectin' callers, " I said.

"Doan see nobody else, Robby, but yore own self."

He had the decency to look at his shoe tops. "Mrs. Belle, does you recall how you was a witness when Sis slipped on that oily floor at Curtis' Auto Repair back in July? And how the whole time she was laid up with her broken ankle and two busted ribs, how it was me who waited on her hand and foot?"

I fixed him wif a stare ya doan wanna never see.

"Young'un, I know ya didn't mean to raise yore voice none. See that it doan happen again. ...What I was a witness to was how yore Sis ignored the signs plastered all over Curtis' place, what tells' folks to stay out of the work area-- big ole red D AN G E R signs. She knowed it, an she ain't got a problem wif it. Leave that dawg lie," I said.

"No'mam. It's like this. At least you recall how I moved in an' was doin' eve'r thang fer her? Well, now she ain't aiming to pay nuthin' for them weeks when I was her veritable slave! She owes me. Owes me plenty. And thas' jes' the money part of it. "

Iffin' I'd had a hoe I'd of brained that low-life skunk.

"Youse a snake, Robby, not a brother. Ever'body here an' yonder knows the score: Youse out of work--again--an' Sis let ya move in, eat her food, keep warm and clean an use her computer to play endless games of War of the Worlds. I'd say that is a fair trade. Ya' ain't due a dang dime, so slither on out mah gate, now afore I really gits riled.

His voice turned as oily as Curtis' floor.

"What ya doan know MRS. Belle is that I is a snake wif' a lawyer and that lawyer wants to meet wif ya'. Cause you seen the accident and the conditions of criminal neglect that Curtis calls his bidness...I'se a man wif a lawyer thas' who I is. You oughta show me some respect."

I was on the way into the house when I turned back to see his face, scrunched up purple as a turnip.

"There ain't a lawyer in this town who would take this farce as a case, Robby Joe," I called back over my flappin' robe, hands full of blossoms. "Respect is earned, Robby, earned."

"I is done wif folks in this town! I got me a big city feller off of a billboard, WhocanIsue.com! And he say I got a good case. He will take your statement by videoconferencin' so it won't cost you or me nuthin.' He say I have a case! I AM OWED."

I slammed the door. By the time I collected mahself, I realized that Robby Joe is a product of our sludgey, sick culture. Everybody wants to make a buck on the next guys back.

Ever think how money is corruptin' our relationships? Ain't we monitized ever'thang possible? How much of the last generation was thinkin' they was engaged in "wealth creation" when all they was doin' was makin' people pay for what we once done naturally fer each other?

One of Uncle's huntin' buddies never eats at home much now. His wife is a real fine cook. She opened Bonnie's Cafe on the road down to the huntin' camp. She makes enough money at it to keep her kids in a day care and to git herself an I-phone an' upgrade her make-up brands. The day care is owned by her sister-in-law. They used to keep each other's chillen when the need came up, but now one charges the other fer the service, an' the other pays with money made sellin' cawfee and apple pie to other menfolk lookin' fer a taste of somethin' homemade.

Well, I doan know. Does ya'll see that as "wealth creation"?

Thas' what Cafe Bonnie said at the Camp's Fall BBQ. How her --hers, now, not theirs--accountant said now that she had a cafe, where she sold the fruit of her labor, she was another American engaged in"wealth creation."

Then she said how her other half was plannin' to sell his famous BBQ sauce on the internet. More "wealth creation." I doan know how much he sells on the internet. What I does know is how he used to give ever'body in the camp a half gallon jug of that finger lickin' good sauce at Christmas time.

Now he doan do it cause he can get 5 bucks fer it online. He "cain't afford" to give it away no more--his accountant say so. He's cozy wif' the accountant-as long as he pays the accountant's bill. Thank is, he ain't as cozy as he used ter be wif' his ole buddies. Not that they's mad over a bottle of hot BBQ sauce---nope, it jes'that they's put off some by the idea that now he sees them as customers first, friends second.

Reckon I'se old fashioned, but when a person's labor goes to care fer family, or is given freely to friends, it has enormous value. It jes' ain't monitized. Ever'body is worriet over "capital." Well, what about family capital or cultural capital? If it doan draw interest--or more important,iffin' ya cain't use it fer collateral, does that mean ot doan have no value?

Now we's all so money conscious, we see friends and neighbors and buddies and family as one more place to make a buck. What ya reckon it does to relationships when every skill or hobby or friendship we all used to simply share as part of family or community--all that is now appraised
for "wealth creation"?

Iffin' ya fail to "create" wealth, no matter. Jes' log on to WhoCanISue.com

Y'all I hopes ya' remember that on Tuesday and Wednesday we's gonna have a cyber garage sale" please put up lists or pics of yore junk--all that ya wanna purge (see previous post) an' we can play show an tell over our cyber garage sale!! (ya ain't akshully gotta sell it--we all jes' wanna see yore junk , er, junque.)
Posted by Aunty Belle at 12:55 PM

Labels: Aunty has had it

I was always impressed with the lengths my old boss would go to in order to do trade with people. Thousands of dollars in service, food, supplies, etc. were bartered back and forth.

I ain't to sure if I'm gonna display my Junk online, but I do agree with your assessment of greed and sloth.

sending you some healing xoxox's. I'll try to be there on Tuesday.

Joey B! Hey you--always happy to see ya! Bartered huh? We may soon see more an' more of that!

I reckon mah worry is we's lost the communitarian worldview--the true "common good" that heps us understand that whar we live and the folks we have around us is social an' human capital--that is, it has value beyond money. The King Midas idea, ya know? If everythang is only gold or a means to gold, that is a cold cold life.

Am sure ya got some ole stuff ya need to ditch, doan ya? What about that stack of old magazines behind the door thas' near 'bout a fire hazard?

Happy we's in accord on the greed/sloth thang. We need to preach it to the rafters, doan we?

Boxer Babe! Darlin' is ya all moved? THe deed is done? Know youse plum whipped by it all. Thanks fer the XOXO of healin'--this thang done flattened me! Oh please pelase try to make it Tuesday--or Wednesday--ieven if ya jes'
list thangs wif no photo--ain't iut funny to see what folks hung onto that should been tossed months (years???) ago?

Oh! Wait wait--Joey B, does ya know that Fishy blogger has an ole timey press--fer makin' books and prints--she might talk her blowfish into lettin' ya come it!!

Aunty Belle,
I was pleased to read you were improving enough to go Sasanqua cutting, even if you weren't up to getting fashionable.

I spect it woulda been satisfying iffen that hoe had been near to hand for smashing some decency into that thick skull of 'ol Rob as it seems full of mean and greed and devoid of intellect or shame.

Ise affeared the current economic culture might not bring the "cleansin" you hope. Might just inundate us with more slitherers looking for those lawyering billboards. I once had a neighborman with a Florida vanity plate saying "Isue4U"...made me wonder iffen it was his billboard.

Sad about the apple pie and BBQ folks. Reckon it's a good thing you and Uncle got stocked up on the Maurices.

On you passages 'bout the family/cultural investments of self...well I believe the net gain of those investments are beyond monetary quantification cause, they are of course, priceless.

Hope youse is well enough to enjoy yore Cyber sale. I think I got my camera to computer glitchamabob figgered and will be taking some pics soon as I fetch thangs from they stash places.

Aunty Belle, If you is getting some strength back take a look over to the editorial reprint I posted on your Back Porch. Iffen you are not feeling well, then please don't read it...it probably wouldn't be safe.

Auntie, you sure do talk sense. The old burned-out legal secretary in me was bristling when I was reading this post, and I worked for lawyers who did good things for people, but that meant there were people who were after something all the time on the other side. Grrrrrrr. Ruff! Ruff! Makes me barking mad.

sorry youre still low sick -weird expression but i like it. i saw that same billboard coming into the city from chickory. who can i sue? howabout the punk ass lawyer at whocanisue.com? unbelievable. you know my neighbors keep telling me to post the property? why? cause if somebody tresspasses and gets in the creek, slips and breaks their head on a rock, then they sue and take chickory. dont laugh. remember the story about the girl who climbed over a fence, got on a horse, got thrown and she successfully sued the owner?? no warning signs. nice. nice culture.

i hate maurices. lets see...how can i make a buck? how about i bottle up some mustard and call it barbeque sauce? sheeesh.