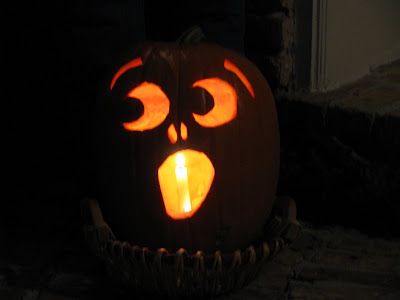 We had so much goin' on I had to hitch mah skirts an step spritely!

We had clan hep, so we carved up a fine jack-o-lantern. We set out some of the clan' scarecrows from last week's Great Scarecrow Breakfast, jes' to give it a flair. 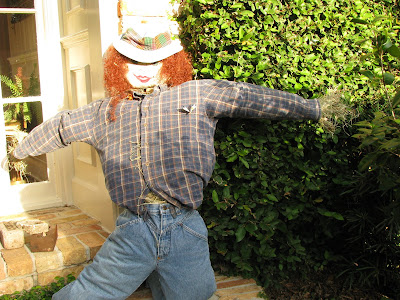 An' I did fix another signature black an' orange All Hallow's Eve supper that ya can see in prep here: 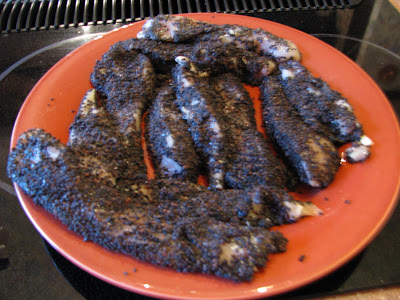 Hope ya'll had the most-est fun too!

Well Aunty, soounds to me lak you and the clan had a fine All Hallows Eve. Over in my pond I was a scairt a plenty cause i watched The daVinci Code movie while awaiting the costume parade to come treat me with their creativity in exchange for my fine chocolate treats! I was a bit let down, not too many costumers this year, makes me wonder where American childhoods have gone. One really good catwoman and ,beleive it or not, one "Twiggy" made the best splashes at our pond. Course, this little "Twiggy" felt obliged to explained very carefully who she was! The twig part was right on but she didn't have five layers of them false eyelashes! I gave her double chocolate for the memory!

Looks delicious! Hope you had a marvelous time!

Congrats on the football win. I'm a Dawg fan, but still - can't help but admire the way the Gators have been playing.

I'm officially adopting another team after my UW Huskies suffered another big loss. *sigh* Gators look good to me now.

Glad you had a good Halloween - mine was a T R I P. As an adult, my best. 300+ children and their costumes. Sooooo cute.

what? you won't eat reeces peanut butter cups ..?
we had quite a few trick or treaters which kept us fairly busy.
i do like your scarecrow tradition.

That is one cute pumpkin. I loves me some eggplant. You can have the peppers. Hope you had a fun Halloween.

wow i like that scarecrow. id love to build one myself. i found some good cheap plastic crows that are feathered to stick on they bodies. i like the black and orange menu. good idea~!