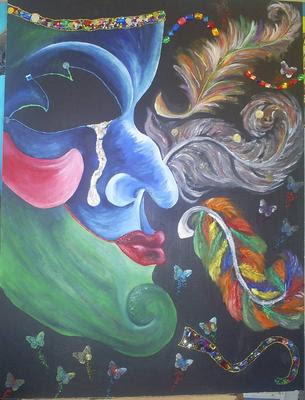 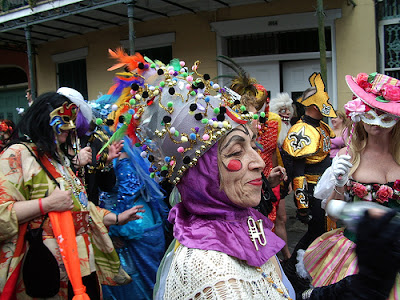 Fat Tuesday, Mardi Gras is today. Ya'll knows this is a whale of a party, the traditional day folks party hearty, eat plenty and revel in all manner of merriment, cause tomorrow be's Ash Wednesday.

Thas' the first day of Lent, the season when Christians observe the 40 days of prayer and fasting and abstinence until Easter Day. (lessen' youse Irish and take a day off when St. Patrick's day comes on March 17) 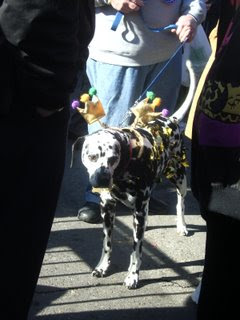 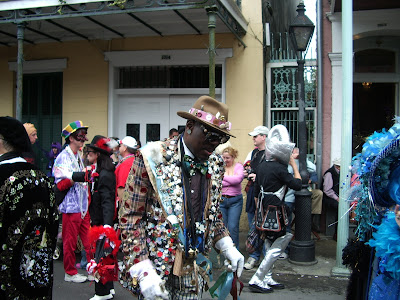 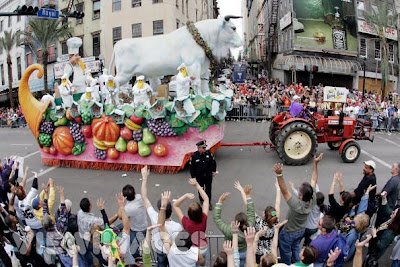 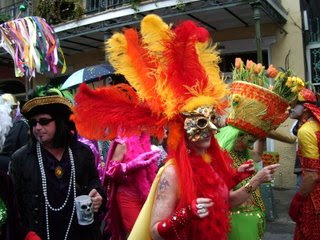 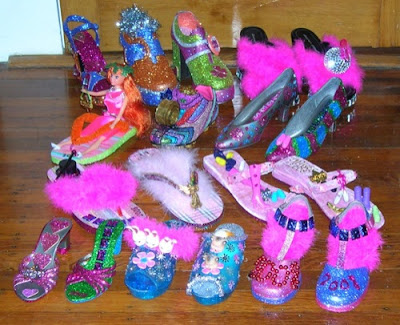 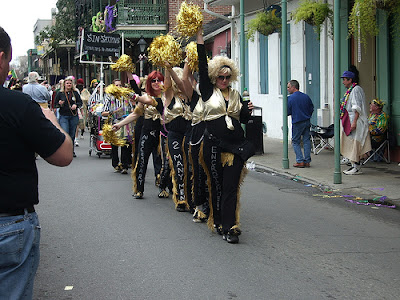 In case ya ain't heard, it were the French explorer M. d'Iberville. who brung Mardi Gras to us from France--'member when he came over to New Orleans? An' lemme tell ya'...N'awlin's ain't been the same since. And other gulf cities celebrate too-Mobile and Pensacola...

Well, by the mid 1800s it were the Mystick Krewe of Comus who was the big cheese fer Mardi Gras. They ruled. Other "krewe"s developed and there was friendly rivalry ...an' ya'll knows there ain't nuthin' like a wee bit of rivalry to spur folks to put on the most lavish, outlandish, amazin' parade.


Costumes were a year in the makin' and top secret besides--why the espionage in 1800s New Orleans when this'n or that'n Krewes tried to ferret out what the other was up to was the first CIA playbook. I'se boastin' heah, but it is a true thang that mah very own Gran-Mamee was wore an elaborate costume with a headdress of a peacock to Mardi Gras (long afore Aunty was born!) when they held masked balls and had supper at midnight. I never did know iffin' she was pullin' mah lag when she tole us how one lady the year afore had partied so hard she had twins nine months later, a boy an a girl that she name Revelry and Reverie.


I wish't I could story ya'll some wif all the fine memories me and Uncle have of our times in N'awlins. Mayhap the dearest is when Uncle tole me one mornin' that he had an early meetin' with the high hats in town, but he had a potential fat cat Pork Rind buyer comin' in on the 7:30 flight an' would I go meet fat cat and keep him happy til' Uncle could shake off the city fellers?

"Nope" said Aunty, "is you fergettin' I have young'uns to git off ter school? "

But Uncle promised he would get em' off to the schoolhouse at the same time he left fer town, so I'd best be gettin' to airport and meet fat cat, load him the buggy and bring him home til' Uncle was finished wif' the high hats in town.

Aunty ain't known fer no whinin' but I was miffed. "Wait a minute ...you done promised youse gonna take off the day and play wif' me since it is our annie versry!" Aunty wailed. (Yeah, that wuz then..an' I doan NEVER wail no mo. Thas' dern so true.)

Okay, ya'll's all ahead of the story now, and ya' figgered out that when I got to the airport to fetch the fat cat they warn't no fat cat, but Uncle done raced down a backroad and beat me thar'....an' took Aunty off to N'awlins fer Breakfast at Brennan's. Iffin' that ain't enough to tickle ya' gizzard then I reckon that I can up the ante:
In mah flute of Mimosa thar' was string of 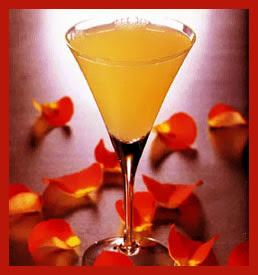 pearls. (Fellas, Uncle doan make a habit of extravagance--he was jes' feein' sorry fer havin' kept aunty bar'foot an'....well, ya' know, so he done sized up the situation an' realized how he might show a his sincerest appreciation. An' I will say that his flights of unexpected fancifulness covers a multitude of irritations. An besides, he has that Rhett Butler Gun-runner image to keep up--an N'awlins is real good fer that.) 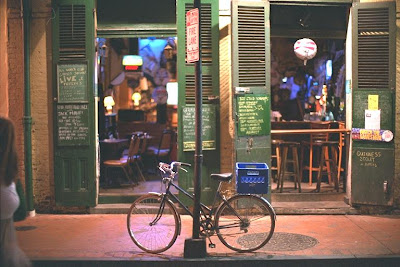 We wuz back afore time to read Uncle Remus to the chillen's, and
when I climbed in the sheets I wondered had it all been a dream? 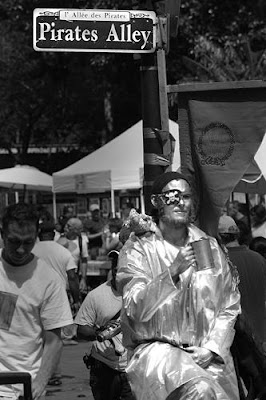 We done had few excursions since that time to N'awlins' --mostly to keep company wif one of mah own wild uncles --he bein' a mere 8 years older (save yore Southern jokes!). How I loved to haunt Pirate's Alley and the bookstore of Faulkner fame 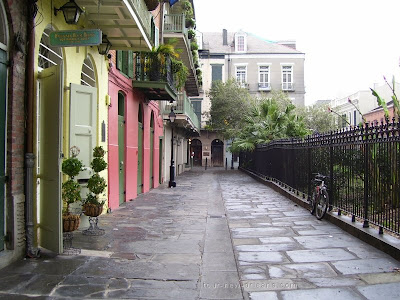 jes' beyond the rose garden out back of St. Louis Cathedral.

An' the ache I still get in mah heart thinkin' of
how we strolled the back streets of the Vieux Carré
lookin'g at pastel creole cottages one chilly January
afternoon, munching cheap hot dogs bought from a one eyed man with a pushcart. 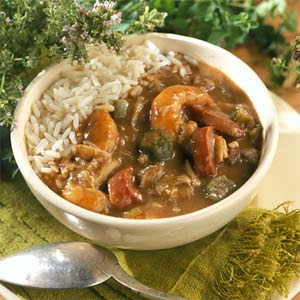 But what ya'll wanna know is that Aunty has fambly over thar' and so I is proficient wif' an iron pot an I can make a gumbo that ya would sell yore soul fer-- though mah price leaves ya enough fer the fare to heaven. 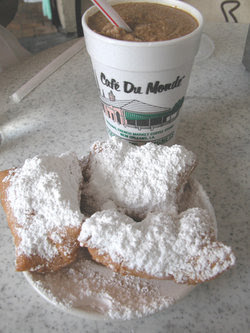 I wish't all of us could meet up one misty mornin' at Cafe du Monde fer them powdered sugar'd clouds known as
beignets. They's served wif hot chocolate or coffee that will
singe yore eyebrows.

An' we'd all marvel at how funny a krewe we'uns make --all different and many of us utterly unlike we imagine from inside the blogosphere... Oh! how we'uns would laugh.

Looky heah...see how many stories I'se tryin' ter get tole to ya'll in jes' one post?

Sweet Thangs, Aunty is signin' off.

I'se ole school, an' the good nuns learn't me how to give up somethin' fer Lent that really were a sacrifice. Ya'll take it as a compliment that youse so dear to me, that youse a fittin' Lenten sacrifice. Ya'll is more of a sacrifice than Prosecco or chocolate. (or Advil!??). So, along wif' other thangs, I'se givin' up bloggin' until Easter.

Oh, I might lurk, but the house rules is I cain't blog.
I'se gonna miss all ya'll every day, miss ya'll somethin' fierce.


Ash Wednesday. "Remember Man, thou art dust and to dust thy shalt return." It is mah favorite liturgical season--a time to reflect on the meaning of it all.

Lovely, lovely post. If anything can get my mind off Stupor Tuesday it's the fact today is also Fat Tuesday.

And what a fun Krewe we'd all actually make.

Reflect well and we'll catch up with you soon!

Oh, and I haven't forgotten your chocolate souffle recipe. Fat lotta good it's gonna do you now, but it will be waiting for you . . .

I'm confuzzled. Does that mean no Mute Monday's posts until that Lent thing is over?

yes, it is mardi gras..
and in germany we used to have our Fastnacht celebrations ..
i figured you'd be doing this again.
you are a stalwart one.

What a lovely fun post Aunty. Sorry that you won't be around for so long (not that I have been either) but hopefully our paths will cross again after Easter. Take care dear lady.

*sniff* aunty. ise gonna miss yew. lovely mardi gras post i missed it i was trapped in hell yesterday and woke up in it again today only hotter. uncles a good main aunty. yew be shore to enjoy him during lent i'll keep a bag of rinds on my page in observation of yore Lenten silence. see ya aunty!

I have a constant urge for my mother's gumbo and for bignet.

I grew up in Louisiana, my father grew up in the French Quarter...I've never been to Mardi Gras. Sad, I know.

I haven't given anything up for Lent in 30 years. We'll all miss you.

Well I gave up my blog for a month so I can't say much except...

And, while I've been to New Orleans, I've never been to Mardi Gras and that's something I need to do. Great post.

Aunty I am all political today on my blog...where are ye?

I have such fond memories of Mardi Gras when I lived in your neck of the woods. Glad to see that it was back this year.

And...AWWWW...and we all thought Uncle was just a man! What a romantic story with the Mimosa pearls, fat cats, & all. Good One :)

One way to work around his special attacks is to use a ranged weapon. The delay timer, programmable up to 19 hours, is particularly useful for running a complete wash and dry cycle when you are away from home, ready for your return. Look into the various suppliers to get the best prices for you that are really going to work. While a filtered humidifier might meet Jimmy's budget, it doesn't mean it will meet yours.