I got meself lost in the blogger cosmos--I thought mebbe Boney or Red or someone done ast me to do the eight- random- things- about- me- meme--but I doan know whar' it were mentioned it...so mebbe nobody tagged Aunty Belle...oh well, I'se doin' it any way!


2. When I was 5 years old I had a breasts big enough fer a brassiere...fer about two days. My sister (4 yers) and me was makin' a game outa stompin' on the bees in the patches of clover in our back yard...and I put the stomped bees in mah shirt pockets so I could save 'em in a jar...

but when they roused from stomped stupor they was mad as hornets and stung the hell outa me wee little nipples until I'se a child prodigy in the chest.


3. I out arm-wrestled a high school senior boy swimmer in the lunchroom when I was a sophomore...an mah mama said that were real dumb. (That boy weren't Uncle... I weren't THAT dumb.)


3. Uncle and me eloped....twice. First time them North Caroliny folks did not believe I was 18 and old enough to do the deed, so we had ter try again the next week after I got a birth certificate ter back up mah driver's license. It is a long haul from Floridy to Charlotte jes' ter git hitched.

AN' nobody told me I'd have ter git mah blood drawn..
I mean, I wasn't all that shure that Uncle was worth a needle...
I is needle phobic....an 'I'se still not shure it were worth it.

But I thought I had ter do it. We was in different colleges 100 miles apart by then. But that wern't far enough for mah Daddy. Daddy din't care fer Uncle a whit. Trouble was, Daddy went ter bed early on Friday nights-- with his National Geographic...and Mama were a night owl. AN Aunty had the earliest curfew in the county. So the scene were set. Uncle brought me home in accord wif' mah curfew...and Mama made me go ter bed upstairs. Uh-huh. Ya'll see what's a comin'?

It were too early fer Uncle to go the the after-date- hang-out cause his buddies had girls with less draconian curfews. So Mama and Uncle sat up watchin' Johnny Carson until it were late enough fer Uncle to meet up wif his fellas and see who had made any scores that night. After a few months of this routine, Uncle (18) asked Mama (35) iffin' he could git somethin' ter drink.

Uncle: "I mean, do you have any liquor?" I know (now) there must have been a wolfish grin on Uncle's face. An' mah Mama called ME dumb????

Well, what mah daddy learned after a spell was that SOMEbody had taught his child bride how to drink screwdrivers. This was dang strange since to that point, Mama ain't never had a drink in her life...though Daddy did onc't in awhile, an' he kept a bottle of vodka fer guests. Does I need ter tell ya'll that things between Daddy and Uncle were never the same? When I went off ter school, Daddy thought that was that. But it wern't. So...

Daddy done made up his mind ter send me off ter Spain fer a Junior Year Abroad set-up...onliest way not to be parted fer a whole year was fer us hitch-up. So we did.

5. I ain't had a drink of no hard likker-- ever...waitin' til I'se old enough fer it. (Wine is fine!) Uncle makes up fer mah lack in this area. He has been waitin' a mighty long time ter see me fall on mah fanny...ha! Uncle can sing The Ballad of Thunder Road better'n anybody ya ever heard..jes' give him a couple of tall Jack Blacks and he'll prove it.
[ And there was thunder thunder on that Thunder Road Thunder was his engine, white lightning was his load.... There was moonshine moonshine to quench the devil's thirst The G men swore they'd get him, but the dev-il got him first.] 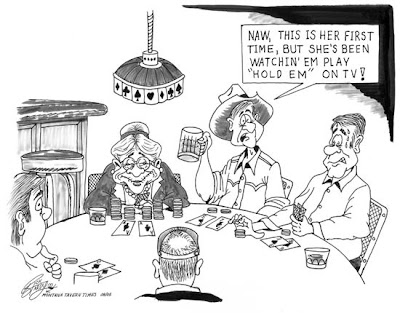 Iffin' I bets, youse toast. I never, ever bluff. Never. But nobody believes me. Why is that?

7. Onliest person that can dance bettern' me is...

Uncle. Well, that's not true no more...I'se a tad down in the back, and doan dance no more. He still a goin', so when we go ter a dancin' shindig, I gotta find some gal who'll take up mah slack.

8. I might have been a surfer girl, loved it the first time I tried it....jes' loved it! 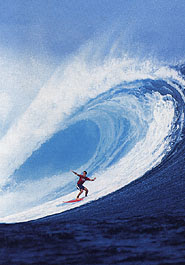 Some boys was showin' me all the coolest tricks. Then Uncle came a tearin' down the beach and ordered me offa that board. He hollered and carried on so...stompin' in the sand like a bull, an' his face was a thundercloud and I admit I was scared of him and so I paddled on in like he told me....
iffin' I hadn't a been five months pregnant with the first edition, I think he'd popped me one.
Posted by Aunty Belle at 10:25 AM

sweat pea,
thanks for the chuckles. i needed them. i giggled my way the whole way through this post.

Oh AB, consider yourself retroactively tagged by me!

Surfer girl eh? We have more and more in common (chocolate and coffee too -though I will dain to partake of the lesser brands when hardpressed.)

Give my regards to the gun runner, dear Uncle Rhett.

i hope you would have popped him right back if he had a popped you fer surfin!

3. If you two weren't in love at the time, you were, at least, persistent.

4. I've been to Spain. What did you think of the Prado?

5. Well, wine will still get you there.

7. Hmm. Do we get to see your dancing on YouTube?

8. Sounds like Uncle put the blanket over a promising career. Couldn't you imagine yourself in LA hanging out with the pretty people on Venice Beach just about now?

Bird Beauty, youse is one big hit wif' Uncle! He is right proud that at least one cyber lady 'member's he is a gun-runnin' reprobate like Rhett Butler. I'll be over directly ter see what youse stirin' up at the nest.

Infini!! Baby doll, Uncle were so dern mad that I might fall and hurt that baby that was along fer my rides that he kicked sand fer a half mile down the beach. But I got my revenge--yep, that boy grew up and did a fair among of surfin' in his own right. Hoo-whee!

An' ya'll...on thang I does need ter clear up....me and Uncle been tangled up a long time now...and *now* mah Daddy thinks Uncle is a right fine fella--all is well that ends well, I guess. But they each will tell ya that the other ain't the dashin-est man in the room. Them two is both swaggery flirts.

Fer # 4. see the my recent Spain photos post immediately before the Nightgown post on prior Front Porch post. I loved the Prado--Velasquez, Bosch...Bruegel (sp?)...be still my heart!

Belle, you have listed two threes and no four.

Them's some great ones, gal!
And, ain't it funny again? I tried a lil bit of surfin right there abouts.... Myrtle Beach.
OK, Can't really say it was surfin' so much as a nine year old kid on a styrofoam board....Ma said, clean up, get in the car ...and what with bein' a boy and all, Thought I'de go run as far out into the ocean as possible for one last try (there weren't enough waves to wash a jellyfish ashore, but, what the hey...
I got out way way WAY far, and was just t'where I couldn't feel the ground anymore when flash! Right in front of me, not ten feet away, a huge (I was nine...everything was huge, then) fin rolled along out of the water enough for me t'see the back of the
SHARK?!?
I dare say, had it been a shark, I probably wouldn't have made it to shore. More likely was it being a porpoise.

But, my brain screamed shark so m'big ol' feet did the trick they're so good at, and I walked, no RAN on water all the way to shore.....

As fer the pix by the items...
m'coffee is usually strong enough t'float a bullet on, but, even though I love good chocolate...
I'll eat a Reeses in a blink!

I hear you about chocolate and coffee... I am beer and cheese snob!

i can see the surfer girl thing. like, totally dudette.

SHE-puppy a dudette??? Yeah, well, that status lasted about 10 minutes.

Jes' one more place whar' life could taken a different turn, ya know???