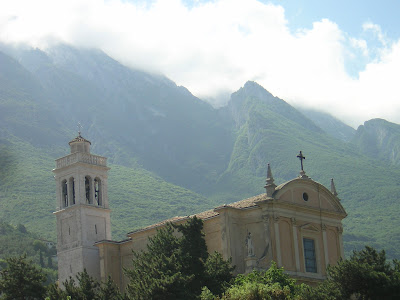 Ya'll...I have so many photos from these last trips--an' mostly they's jes' dreadful. Aunty ain't no photographer. 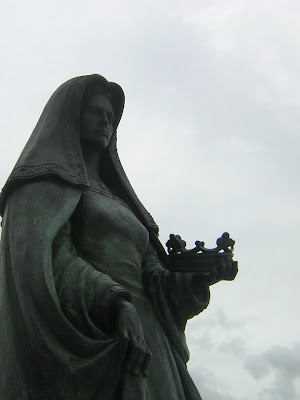 This poor soul has come down to us through history as Juana la Loca ...thas' Crazy Jane in English. But she weren't--she jes' stubborn about who she loved.

That her was a royal, wif' crown an' all, did not stop her folks from lockin' her up in a convent in Tordesillas. 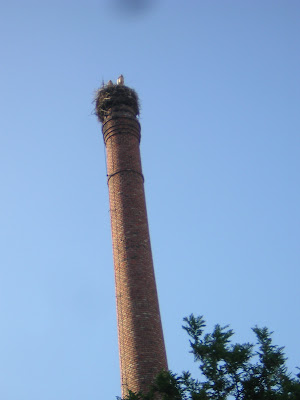 Storks are a big problem...see 'em on their nest on top of this silo-like thang??

An here we have a bride comin' down the aisle on wif her daddy and some wee attendants...in a church that is 900 years old!! 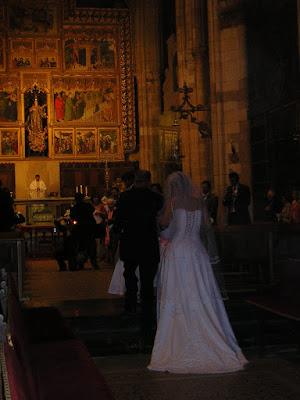 It is touchin'--literally--to think how many hands have touched this church door over the centuries...so I put mah hands whar' a thousand others have put theirs...and wore down the image a little bit more.... 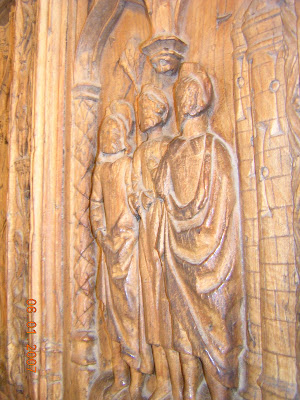 I figger the construction boys was bored , so they had fun palyin' in the sand....hee heee. 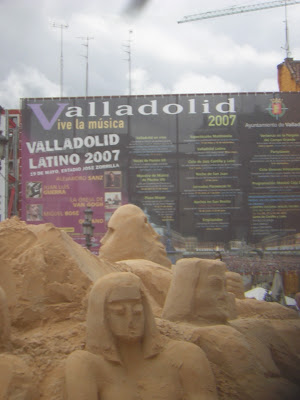 Detail on a 15th century desk in the home of St. Ignatius Loyola in Azpetia. 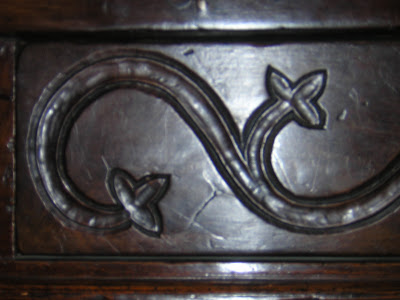 More later ...when I find them--made too many files and now I cain't find them!!
Posted by Aunty Belle at 9:57 PM

I mean the church with the bride!..

Nice! Take us next time!

From the "close-ups" I can make some assumptions about your camera work.

of course, that's assumming in the first place that it's a digital camera, but, if not, then your scanner can be reset to a smaller size....

You take pictures with the biggest possible file, which in a lot of cases is great for amateur photographers...
the huge picture can sometimes be broken intyo two, three, and even five or six pieces, and all are as cool as the one large piece.

You have a camera that has a "movie" option, but only lasts for three minutes if you keep the shutter button depressed...(just keep tellin' it yer gonna replace it with a kohler 125)

Really cool vacation! I love the big church....dang!
Nowhere in the US did I see anything as cool as some of the stuff in europe, but then, some of the things in europe were being used and discarded before the US even was....

The gal with the crown in her hand ...sounded like there was more 'bout her than the bit y'all said.

I was testing the children
in my Sunday school class
to see if they understood the concept
of getting to heaven.
I asked them, "If I sold my house and my car,
had a big garage sale
and gave all my money
to the church,
Would that get me into Heaven?"
"NO!" the children answered.
If I cleaned the church every day,
Mowed the yard,
and kept everything neat and tidy,
would that get me into Heaven?"
Again, the answer was, "NO!"
By now I was starting to smile.
Hey, this was fun!

"Well, then, if I was kind to animals
and gave candy
to all the children,
and loved my husband,
Could that get me into Heaven?"
I asked them again.
Again, they all answered, "NO!"
I was just bursting with pride for them.
"Well," I continued, "then how can I get into Heaven?"
A five-year-old boy shouted out,

"YOU GOTTA BE DEAD."

Boney! Well, thanky--it is digital...an' I lved the kids insight into heaven--hilarious---round whar' I am now, there is a itty bitty graveyard from 1800...and one headstone reads:
"That's all folks!"

I sure hope that bothersome stork didn't leave a baby atop that silo!

aunty: did you get any photos from low grown yo? i hear its beautiful there.

you gotta locate and watch "winged migration" the storks on the towers are in it.

no i meant lo groan yo

Nope, She-Pup, nothing from Logrono this trip...them folks ain't kind ter peregrinas, so I steer clear of 'em...welll, actually it is wine territory, could be a good spot...so,